Apologies for the lengthy report – I’ve tried condensing it!

Drawn once again to the Scottish Highlands, I competed in the West Highland Way Challenge over the 28/29th May.
The WHW Challenge is a fairly low key event, set up in 2013 by several experienced WHW enthusiasts. Having attracted only 5 entrants in its inaugural year, 99 of us gathered at the start line at 10:00am on Saturday 28th. A real testament to the event is that 43 of these runners had been here before. Although admittedly, for several this was primarily due to having failed to complete it in previous years.

Jim Drummond, the race director, exudes enthusiasm. His commitment and passion, combined with his respect for the terrain, are evident from the moment you speak with him.

The WHW is a 96 mile point-to-point race which needs to be completed within 35 hours. Jim, however, is not overly strict about the time cut off. His emphasis is very much on supporting everyone on their journey to enjoy and complete the challenge.

Whilst I have done several multi-stage events over long distances, this was my first single-stage event over such a distance for several years. It was therefore with a little sense of apprehension that I started off from Fort William. Traditionally the WHW is traversed from Milngavie to Fort William, but Jim elected to do it in the opposite direction this year.

West Highland Way Challenge The weather was glorious. The torrential rainfall of the previous few days had cleared to reveal sunshine and cloudless skies. Consequently, the Highlands were displayed in their full glory. An initial steep climb soon lead to a lovely runnable trail through a valley to reach Checkpoint 1. Unfortunately at some point in this section one of my drink flasks had, unbeknown to me, fallen from my running pack. With the day getting hotter, and with only one 500ml bottle, I was quickly becoming dehydrated. After my Cape Wrath experience, however, I reckoned drinking from the numerous streams was a relatively safe option.

Another steep climb, taking in the famous Devil’s stair gate and on to CP2 at the base of the Glen Coe chairlift. I was feeling all right at this stage and was keen not to spend too much time in the early CPs. Particularly as the guy in charge saw Jim drive up and advised us to get going ‘unless we wanted to be here for the next hour and a half!’ Jim can certainly talk.

The next section was quite simply breath taking with the mountains bathed in the late afternoon sunshine. The Munroes, the small lochs and the runnable trail all made for an enjoyable experience.

At CP3, at the Bridge of Orchy, we were able to access our first drop bag. In the second third of the race, each runner is required to carry, on top of the already mandatory kit, an 800g sleeping bag and a bivvy bag. As this extra kit wouldn’t fit into my race pack, I had to swap to a bigger rucksack, tucking the lighter one inside to swap back to later in the race. The new rucksack felt leaden and, after 35 miles, my legs were starting to feel a little weary. Still I pressed on to CP4.

44 miles into the race! Fortified with a mug of soup, I donned an extra layer and my head torch and headed out into the night section. Being Scotland in May, there are only 5 hours of darkness. Thankfully, as I found it a little creepy. With the exception of two hikers early on, I saw no one the entire time. Indeed meeting the latter was a little discombobulating, as my first sight was of their dogs’ eyes reflecting off my head torch. Disturbing images from The Hound of the Baskervilles flashed before me!

Picking out the path, scrambling over rocks and the sound of rushing water were all a little surreal in the pitch dark. The latter stage of this section took us along the shore of Loch Lomond – it’s a very big Loch!

By the time I’d made it to Rowardennan, at 68 miles, the sun had risen although it was still very cold. At this CP I was able to leave the bigger rucksack, sleeping bag, etc and continue with my lighter pack. My legs were definitely suffering by now as I began the final third of the challenge.

At this point, I met up with another runner and we ran together. Assuring me he knew the way (my watch having died a few hours earlier), I was happy to run at his pace. Out of Balmaha and up a rather long hill, however, I began to think we must have gone wrong. Stopping to consult the map, we had indeed! The turning to Conic Hill was a mile back the way we had come! A little disgruntled, and annoyed with myself, I retraced my steps. Assuring me he’d catch me up, my companion stopped to remove some layers as the day was beginning to heat up considerably. As I never saw him again, I hope all went well for him.

From the top, the views of the Loch and Ben Lomond cheered me up and I finally made it to CP7 at 11:30am. 13 miles from the finish.

The final miles to Milngavie were incredibly tough. Flattish, with only slight undulation, I just couldn’t run! I remembered hearing on a podcast ‘If it hurts to walk and it hurts to run, you may as well run.’ Well, no – it hurt so much more to run! With 6 miles to go running just became impossible. I passed a fellow participant , who appeared to be asleep on a bench. He caught up with me with 4 miles to go and we hobbled to the finish together.

And so after 28 hours and 25 minutes I crossed the finish line. Someone told me I was third lady and took my photo. Relieved to have made it, I felt really pleased to have completed the challenge. Especially the next day when I looked back over the map and thought about the distance I’d covered. There was a high drop out rate with 45 participants not finishing. I was 26th.

It was a super event. Great organisation, support, scenery, weather – what more could you ask for. Also at an entry fee of just over £100, a real bargain. No medals, instead a finisher’s wine glass engraved with the WHW. 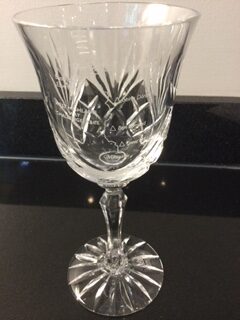