It is with enormous sadness that I am having to put pen to paper to record the death of my friend of over half a century, Mike Jarvis.

Mike was born in Tonbridge in 1941 and throughout his life he remained active, despite having a replacement knee operation some six or seven years ago: in fact, he swam his customary 32 lengths of Tonbridge Swimming pool the day before his untimely passing.

Mike shared 61 years of his life with his wife Gina. They married in 1963 and  had three sons and one daughter. Family was most important to Mike and each year there seemed to be an increase in numbers to find space for at the Jarvis’ Christmas dinner table. I believe 17 children, grandchildren, and great grandchildren were seated last time they were all able to get together – pre-pandemic.

Mike’s working life was spent with the M.o.D. at Fort Halstead; he occasionally lectured at West Kent College. When approaching normal retirement age, he sought part time work and for two or three days a week he would drive the length and breadth of the Southeast delivering spectacles and other optical equipment.

Never far from his mind was sport. He played football for one of the better local sides – Tonbridge Invicta – for many years before hanging up his boots. He moved to athletics, where he performed with some success at middle distances, holding a Tonbridge Athletic Club age group 1500m record for many years. He couldn’t leave football totally and for the remainder of his life would support not only his family members that took up the sport, but also Tonbridge Angels.

His first outings for The Club were within the Kent Cross Country League where he acquitted himself well and decided to compete a little more seriously after his 60th birthday on the roads. He was soon winning his Age Group in local races and his was not long before he had won Kent Championship medals at 10K, 10 Miles, and Half Marathon on the roads and individually and as a team member at Cross Country Championships. Quite an athlete.

During this time, he seemed to be unbeatable at our own Club Championships winning his Age Category on the road from 2002 to 2007 and on the country from 2004 to 2007. He was awarded (voted by other Club members) the Cath Hume trophy for athletic excellence in 2002

He was more than just an athlete. He was a great club man, always willing to lend a hand at all club events and supporting at races where he was not running.

From his early days he would do many of the unsung jobs at our own Half Marathon and, when Ian Dyke moved from the area, it was Mike who picked up the organisation of marshals for The London Marathon that our Club had provided for years. All without fuss. Never with a raised voice.

He was awarded the Club’s highest award, The Cornell Medal, in 2005.

Qualified coaches at the Club had been reduced by a number moving from the area and Mike was willing to step in to fill the gap. He was always willing to share his knowledge and help all athletes, fast and not so fast, to realise their full potential. It says something about the man that when I was able to resume coaching, having moved back into the area, Mike offered to step aside to let me take over the whole group. We agreed that we should work together with an expanding group, to pool our collective knowledge. It worked well. It has been a privilege to work alongside Mike.

As I wrote at the beginning of this piece, I have known Mike more than 50 years and in all that time, I never knew him to lose his temper or even raise his voice. He was certainly not soft but chose to get his point across with sound reasoning. A gentleman and a gentle man. 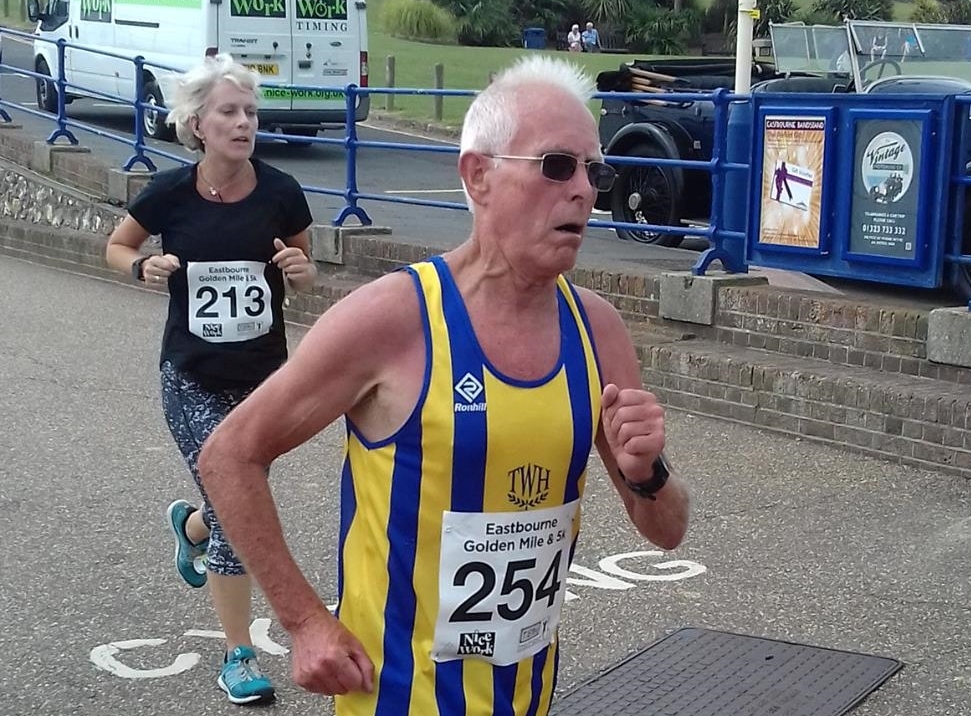