It has been a while since I have written one of these, but I enjoyed this race so much, I thought it worth telling everyone know about.

Fresh from Abbey Dash induced disappointment, I was in search of another fast 10k race – actually, this isn’t strictly true, as I had entered Percy Pud before discovering my previous PB had been ‘dashed’ from the records! Percy Pud is so popular that the more than 3000 places are sold out in minutes after entries open a couple of months before the race, and swaps for numbers are very highly sought after in the preceding weeks – pre-meditation is necessary! It did, however, provide a suitable opportunity for an attempt at restitution.

For locals, this race marks the beginning of the Christmas season. There was a brass band playing festive tunes at the beginning and end, numerous Christmas pudding hats and plenty of seasonal fancy dress costumes. The chilly, 1 degree conditions felt apt.

The course starts in Loxley Valley, just a 3 mile jog from my front door, before heading alongside the picturesque Damflask Reservoir to Low Bradfield, and heading back along the same route. There is a bit of a rise up to halfway, and you can feel the sharp undulations in the final mile. That said, it’s a quick course with plenty of PB potential.

Having missed a lot of training due to illness in the previous week and a half, I wasn’t expecting much. In fact, it was only on my run the day before that I was beginning to feel better. The race starts very quickly, with the first 400m slightly downhill. I was able to resist the urge to go flying off, and managed to keep a relatively even pace for the majority of the race, before quickening in the final half mile in a fruitless attempt at a sprint finish. Illness considered, I was very happy to come away with a PB.

I was definitely not the only one using Percy Pud to vent frustration at those missing 23m from Leeds Abbey Dash. Omar Ahmed, who also won Abbey Dash, was first home in 29:00, breaking the old course record and taking the £1000 prize money which came with it. Furthermore, not to be outdone, Olympian Eilish McColgan took 35 seconds off her own course record, running 31:48, the second fastest British women’s 10k time this year. I was just ahead of Eilish, finishing 7th in 31:43, which, assuming the course was of the correct length, I believe to be a new club record! Whilst every finisher gets a 2lb Christmas pudding and a very stylish orange beanie (as modelled in the attached picture), I also won £50 worth of running shop vouchers and a bottle of champagne!

I believe I was the only Harrier taking part this year, but if you know that you will be in the South Yorkshire area at the beginning of December next year, I couldn’t recommend it enough! Despite the large field (2815 finishers), the event still has the pleasant local feel, which will most likely have me returning next year. 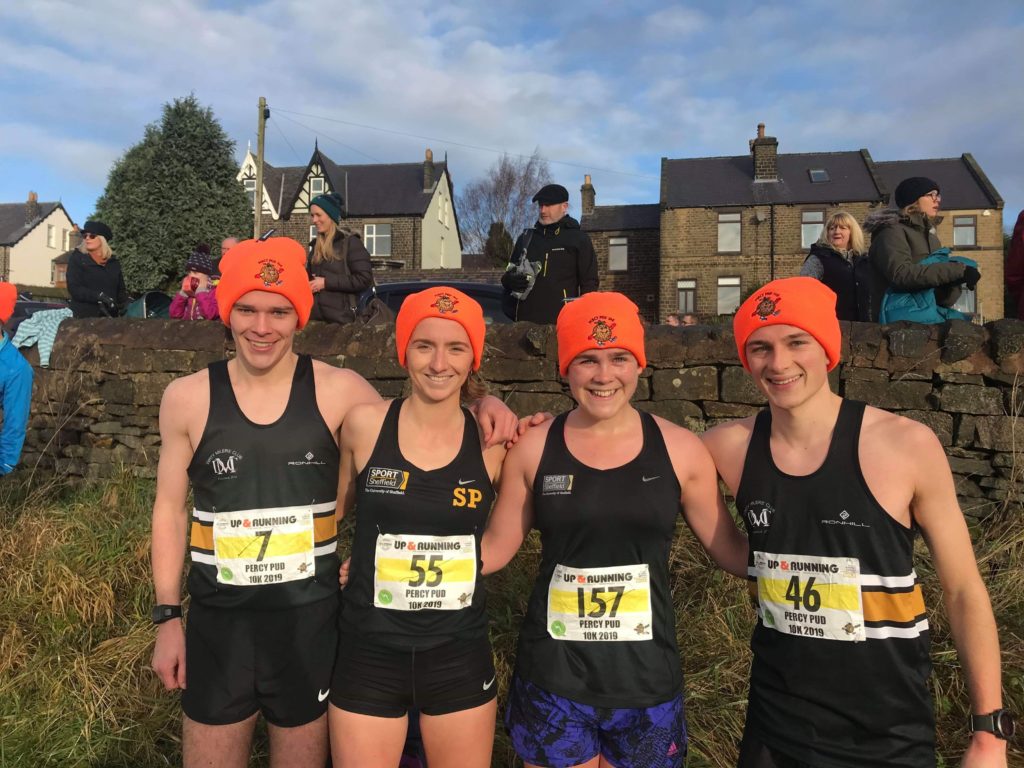