On Saturday 15th September I headed to Groombridge Place for the Maverick inov-8 Original Kent trail run.  Maverick do a series of races across the country and some guys at the club had mentioned that there was one nearby in September, which seemed ideal.

I originally signed up to do the 14k distance, but on the day, it was so bright and conditions were good, so I signed up for the 21k distance instead, which actually ended up as a 23k route due to some issues with signage either being stolen or accidental misdirection by the marshals.  Also just before the race, Tomas Vnucak spotted me in my Harriers jersey; it was good to see another Harrier there and we ran together for parts of the race.

The route was very scenic and took in many of the delights of the local Kent countryside including Harrison’s Rock, White Hill Down and Broadwater Nature Reserve.

All round, a very enjoyable run and one greeted by a trail ale and a large medal at the finish line!Further details can be found at:  http://www.maverick-race.com/results/2018/9/16/the-inov-8-maverick-original-kent-2018-results

On Saturday 22nd September conditions weren’t quite as good as it had been raining most of the day, but I had signed up a while back for the Bedgebury Twilight 10k and I was keen to experience this event.  We all had head torches and started at the cafe before heading off around the lake and then through the Bedgebury trails.  As the light got dimmer, our head torches came into their own and there was something quite magical about just running with a head torch for company amidst the towering trees.

I surprised myself by coming home in 1st place in a chip time of 42:01, which I was obviously delighted with.  I thoroughly enjoyed it and would definitely look to do similar sorts of runs again.
A fellow Harrier, Matt Clark came home in second place in a time of 42:49 whilst the first lady was Abigail Cross in 10th place with 47:24.  Overall, there were 101 runners.

I was happy with another medal to add to the collection and a bottle of red wine for first place.

Further details can be found at: https://www.nice-work.org.uk/races/Bedgebury-Twiight/2018 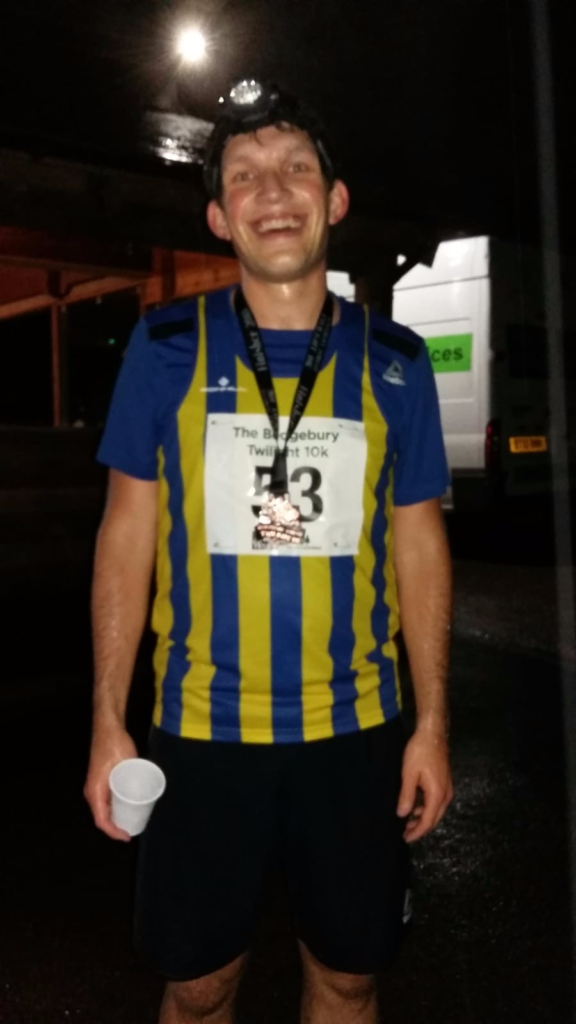