The course is entirely within the beautiful city of Florence, on wide boulevards, narrow cobbled streets, across bridges and through parks. It was absolutely flat apart from a single bridge over a railway line and a couple of underpasses. Switchbacks gave the opportunity to catch a fleeting glimpse of the other harriers as well as seeing the historic sights again in case you where checking your watch the first time. Lots of right angle turns through the old city kept you on your toes while disorienting even the most orientated. The Duomo loomed large at the start and elusively several times towards the finish.

It started to rain about 2 min after the start and didn’t stop for the next 2.5 hours. Neil, inspired by the driving rain (as we approached the football stadium to do a lap of the track half way through the marathon?), recalled Axl from Guns and Roses, urging him to carry on running otherwise, “…I’ll just end up walkin’ in the cold November rain”.

Mike King led the Harriers home with another marathon PB of 75 seconds, clocking exactly 3:01:00. Considering this was his second marathon in six weeks, it was another sterling effort to try and break the 3 hour barrier.

Simon Howden in his virgin Marathon qualified for The Virgin Marathon in London, dipping under the good for age at 3:13:11. More first marathon thoughts later.

Neil Clark stopped several times in the first half losing a minute each time (was this when he first had the thought, it’s hard to hold a candle in the cold November rain?) but then stormed the second half overtaking first Andy Joad, then Geoff Turner, then Steve Austin. Spurred on, Andy overtook Geoff and Steve. In the last kilometer Geoff also caught and passed Steve in a total position reversal. Steve said after the race, “They are all bastards!” Geoff took back his position on the road from Andy but not in chip time leaving the four within a couple of minutes of each other around 3:24 to 3:26. More quotes followed by the respective overtakees referring the the respective overtakers as bastards.

Not far behind the boys was Hayley Larkin with a 7 minute PB of 3:27:23 with the best category (30) and gender position (97) on the day. If you include the drinking in the whole day’s effort Hayley definitely lead the Harriers home.

Richard Quartermaine followed with a very credible 3:31:47 just a shade over his PB. However he did lead the Harriers in the heroic post celebration early morning decent of 414 steps of the tower at the Duomo.

David French led the Harriers in the post marathon 100m dash from pub leaving Mike trailing in his wake – the rest of us declined to participate. The cold November rain also caused David French’s blood sugar monitor to stop working so had to manage his sugar levels manually with his trusty packet of jelly babies, resulting in a sugar fuelled 3:52:50.

Carol Tsang on six weeks of training set off at a unrealistic pace of 9 min miling. Through sheer determination and will power kept going to record 3:57:30. This had two significant consequences. I spotted Carol when she has 2km to go and gave her a big supportive cheer, and brace yourselves for this, she didn’t even smile!! The second was she was unable to walk afterwards. Having covered about 100m in 20 min back to the hotel an ambulance stopped and offered help. But then I recalled a story Mark Taylor told us when he injured himself in a race, he ran backwards for the last few miles. I turned Carol around and her legs started working again. We covered the remaining 500m back to the hotel walking backwards in no time at all. Carol said after the race, “I’m never ever ever ever ever ever ever doing that again.” There may have been a few more nevers and evers.

PB of the day goes to Amanda Smith who took over 30 minutes off, also breaking 4 hours at 3:58:50. Amanda had let her pace slip and with 10 miles to go decided she didn’t want to attempt another sub 4, dug deep and gradually increased her pace to break the barrier.

Mark just missed out on his 4 hour target but was happy enough with a 4:01:27 performance on the day. Mark said of the race, “A convoluted course and most certainly the coldest and wettest marathon I’ve ever run.” Thankfully he brought Jane to shout out support at 25km in the pouring freezing rain which took some commitment of its own.

Joan swept up with a PB of over 20 minutes at 4:16:40, an excellent time after being off running for a while – hopefully she’ll be back to running regularly again.

Everyone who participated, without exception, was pleased with their performance. All agreed the weather was shocking, the cobbles were cobbled, the corners were right angled and the course was flat. Celebrations lasted into the early hours in the fine of post-marathon Harriers tradition, except as our hotel was next to the bag drop we all had a chance to shower and change before hand. All in all a brilliant Autumn marathon tour.

Some of my own random thoughts about my first marathon below.

It’s far!
You have to train … well.
No matter what, those last few miles are effing hard.
Sticking to a realistic plan is an imperative. As I was told a hundred times, don’t go off too fast. That advice rang in my ears all the way round.
It doesn’t matter how much body glide you put on, when it pours down things that move will chaffe.
Stairs are evil.
Shoes are always in the bloody floor.
It is one of the hardest things you’ll do and while you’re doing it you can’t imagine ever signing up to another one… until it’s finished… 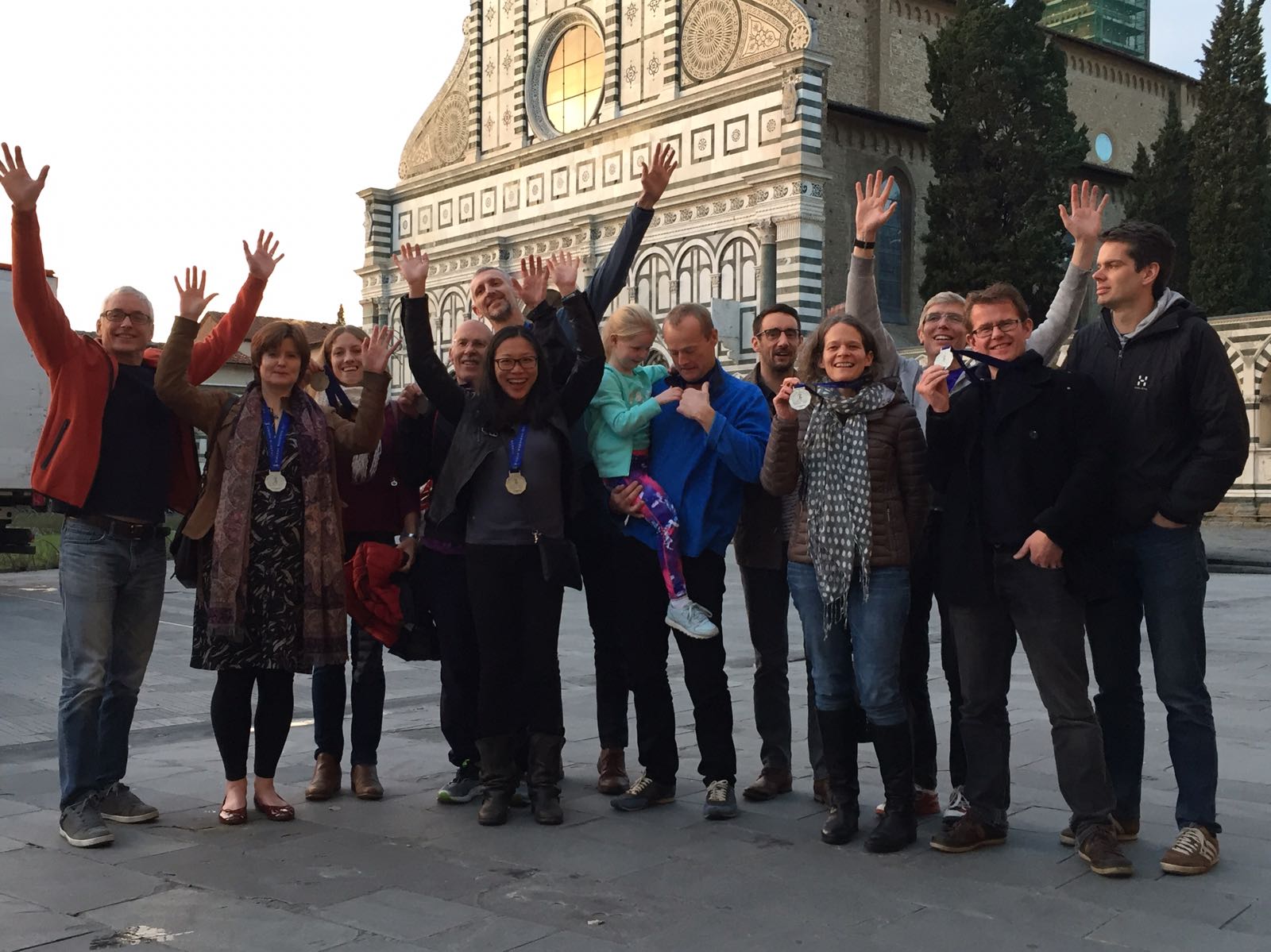