2017 started incredibly well for me, then within a week, I was out with a stress fracture, came back too quickly and had another in the same foot, 2017 became a write off running wise. I then started running again in March this year. Whilst on a training camp in Portugal, I was recommended to run the Cardiff half marathon as its fast and flat. I signed up and in typical Woolley fashion set myself two tough goals for the year, run sub 80 for Cardiff Half and run sub 36 mins for a 10km.

When you enter a race, you never know what the weather is going to be like unless you enter on the day, Cardiff was sold out 6 months in advance!! A mere 20,000 people entered making it the second largest half marathon in the UK. The gods were certainly shining on me and the 18,966 finishers yesterday as the weather was absolutely perfect, still with no wind, a little sun shine and no more than 10 degrees. But it’s not all about race day, it’s the hours spent meticulously training, not missing one session, its making sure I ate well and kept hydrated and avoiding bugs (the office). Just a little extra info, I started training weighing 80kg in March and come race day I was 74kg, this certainly helped me. One thing I made sure I did during the training months was drink 1.5 litres of fluid for every kg lost in weight during a run.

79.59 was always going to a tall order especially coming back from a hideous injury, there were times I thought I wouldn’t even get close and had sleepless nights as a result. It wasn’t until the two weeks prior to race day when the confidence built and the taper started that I knew I was going to get really close.

Race day arrived, this year in its 15th anniversary saw it become the Commonwealth half marathon championships, Lucy Reid fresh from winning Eridge 10 last month got a call up to run for England the week before!

For breakfast I decided to opt for two slices of brown toast with blackcurrant jam, no butter and two cups of tea, 3 hours before the start and a banana 90 minutes before the start, plenty of water but more importantly no gels either before or during the race.

The gun went off and everyone runs for their lives, I tried to hold back and run easy, targeting 6.07 per mile the watch bleeped at 5.45, I immediately thought I had blown it and then I thought let’s just roll with it, slow down a bit and get stuck in.

Cardiff is a great course, heavily spectated. The only shock to the system is what looked and felt like a mountain at exactly 12 miles but get over that and its flat out to the finish. With the final bend and home straight to negotiate the clock was showing 1.18.07, I knew I had smashed my target to smithereens, crossing the line in 1.18.42, 6min 29 sec PB. I even beat a chap running for The Seychelles!

That’s one goal complete, on 21st October I will attempt to beat my second goal at Hove 10km! Come and join me

See you in the week 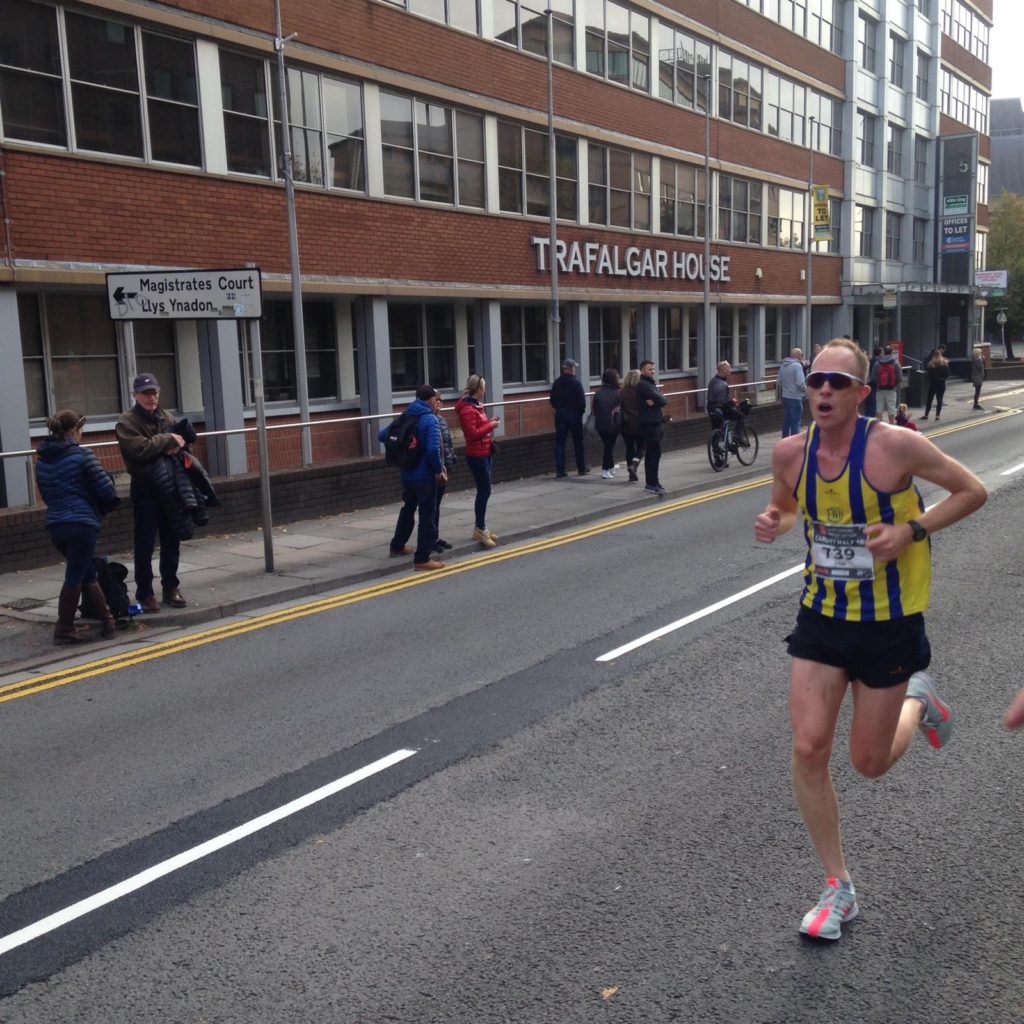