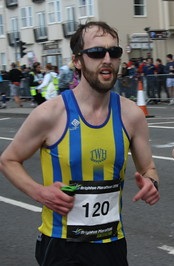 As was shouted to me around mile 24 by Geoff Turner, ‘first harrier home you’ve got to write the report’ it therefore pains me to pen this missive!After a week of pretty poor weather, a frosty morning opened up to brilliant sunshine down on the coast for the 6th running of the Brighton marathon – a lovely looping course around the city and seafront that provides multiple opportunities for spectators to support all parts of the race.

25 harriers (found so far) ventured down, with 21 heading to the mass start at Preston park and 5 starting from the invite-only Withdean park along with the elite men and women. 7 harriers were attempting the distance for the first time.

I last attacked this back in 2011 in my own debut marathon, there have been some thankful changes made since then to cut out a bottleneck around mile 9 and to break up a tedious out and back slog from miles 15 to 18. Organisation unfortunately was a let down, with the entry to the park being a total mud-fest from the past weeks weather (despite having thousands of available mats to put down), hardly something you want on your shoes for 26.2 miles. The toilet queues were crazy for those at Preston park due to the mixed 10k/marathon races and at Withdean there were still queues 20 people long while the announcer was screaming that the baggage lorry was leaving. Then for the 5 of us attempting sub-3 times, the 3hr pacers confusingly started from the mass start.

Nevertheless, multiple ‘3:05’ race plans were thrown out of the window in the first mile, with myself, Kieran and Mike settling into a good pack to keep each other company, a nice change given my usually lonely marathons. The pace was fast, but on track for 3hrs and despite some jostling we all stayed within sight of each other, crossing the half way point in similar times and regrouping around mile 16. The course still becomes sparse and tedious around miles 19-22 around the docks with little support, but before long you’re on the home stretch with the pier in sight a short 4 miles away, with lots of support to get you home. I finally caught the 3hr pacers over the finish line to join the sub-3 club for the first time.

Bob produced the results and has found 8 PBs, with special congratulations to Kieran and Mike for huge time reductions, Nicola Morris for yet again achieving yet another PB (again) and definitely to Ana-Maria Green somehow shaving a minute off her ‘impossible sub-4’ time in 2012!

There was great support round the course, including chairman Andy Howey with the club flag, the full Richardson contingent, many partners and wives, and the ever-present Bob and chief-encouragement-officer Tom Wooley.
Thanks to everyone who came along and congratulations to all the PBs and debut races. Thanks from myself to Geoff for driving, then parking 3 miles walk from the finish on a hill I cannot believe exists in Brighton.

If you have any photos please let me know, otherwise I’ve put what’s been posted so far on the harriers photos gallery
http://photos.twharriers.org.uk/Races/Road/Brighton-Marathon-2016/