On Saturday 26th October I ran my third marathon at Beachy Head, now in its 39th year and formally the seven sisters marathon. I’d heard a lot of stories from previous competitors in and outside of the club (good and bad, but mostly good!) and thought I’d give it a go. It didn’t disappoint!

Fearing the worst in the week run up, to my amazement the running gods were on our side with blue sky and sunshine as we lined up at 9 to ‘run’ up the initial joke of a hill. After the congested initial ascent it was clear we were all in for a bit of a battering from the wind for the next few hours but the views were just awesome throughout. There were some periods in the first 10k that were quite congested and frustrated a few runners, but I wasn’t going to complain about some enforced walking up hills at the start of this beast. If I were running it again I’d probably start nearer the front though. 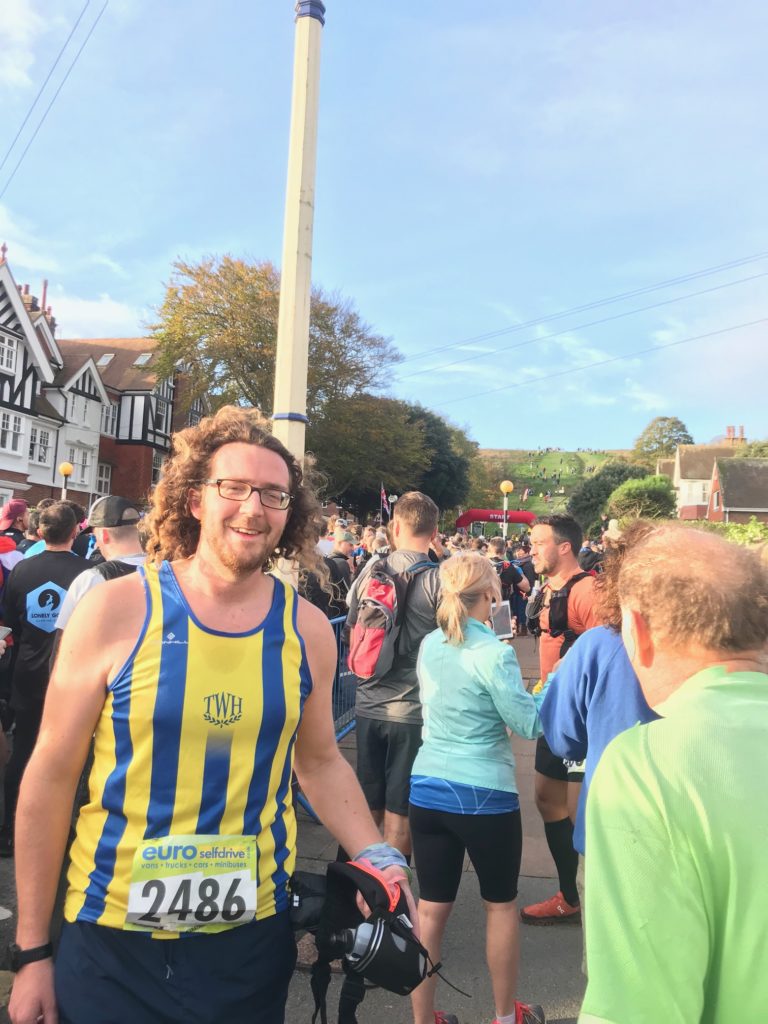 With the recent weather I wasn’t sure what to expect from the all trail route, but apart from a couple of short muddy sections and late diversions in the cuckmere valley, ground conditions weren’t too bad. I was surprised at how hard going underfoot a lot of the chalk and flint paths were compared to the squidgy trails around Kent. Tough even in trail shoes with rock shields and several rolled ankle victims en route. 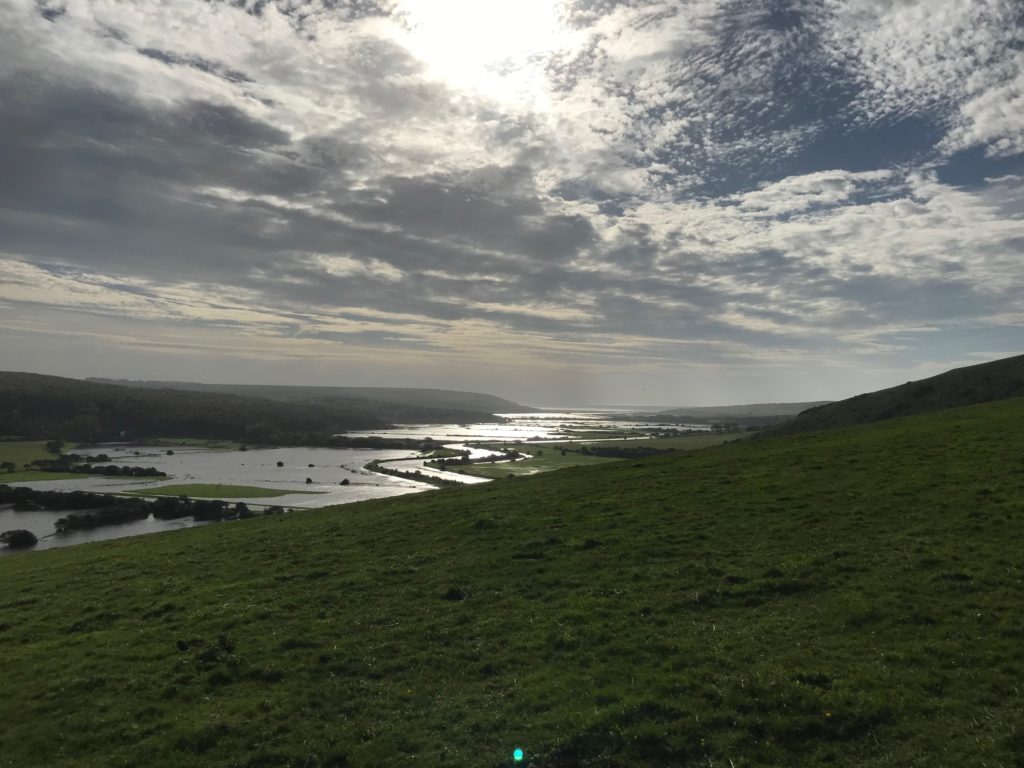 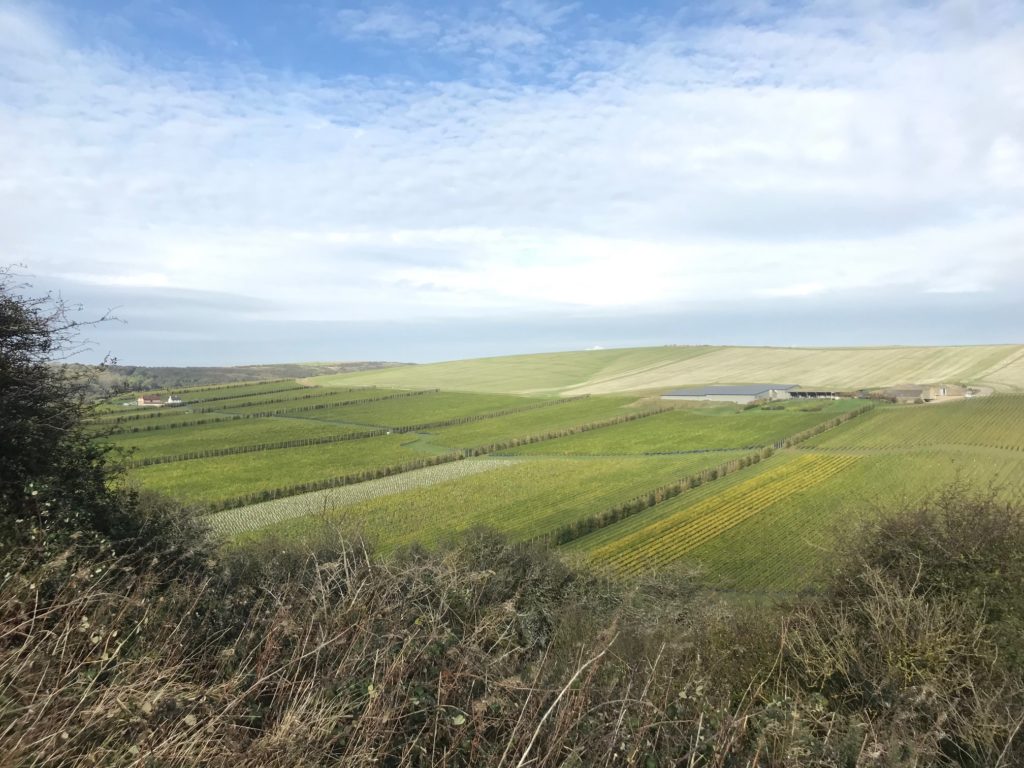 The final 10k over the 7 sisters were truly punishing with 32k in the legs already. Nobody by his point was running up them and it was surreal sharing our race route with backpackers and Asian tourists on day trips! 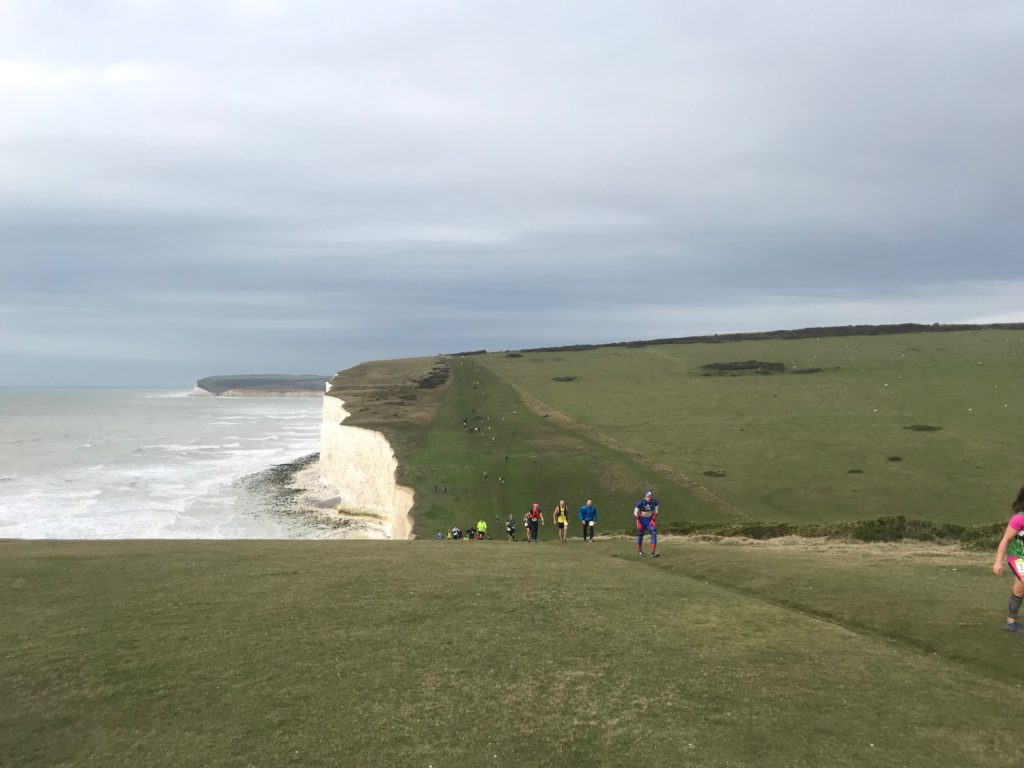 As I approached the end of the race there was a bit of a respite in the rolling green monsters and despite promising myself I was going to take this one easy I found myself watching the garmin and pushing on for the sub 5h. I finished in 4:54:18 with my fastest split being km no 42, so I definitely earned my complimentary jacket potato and beans at the end. 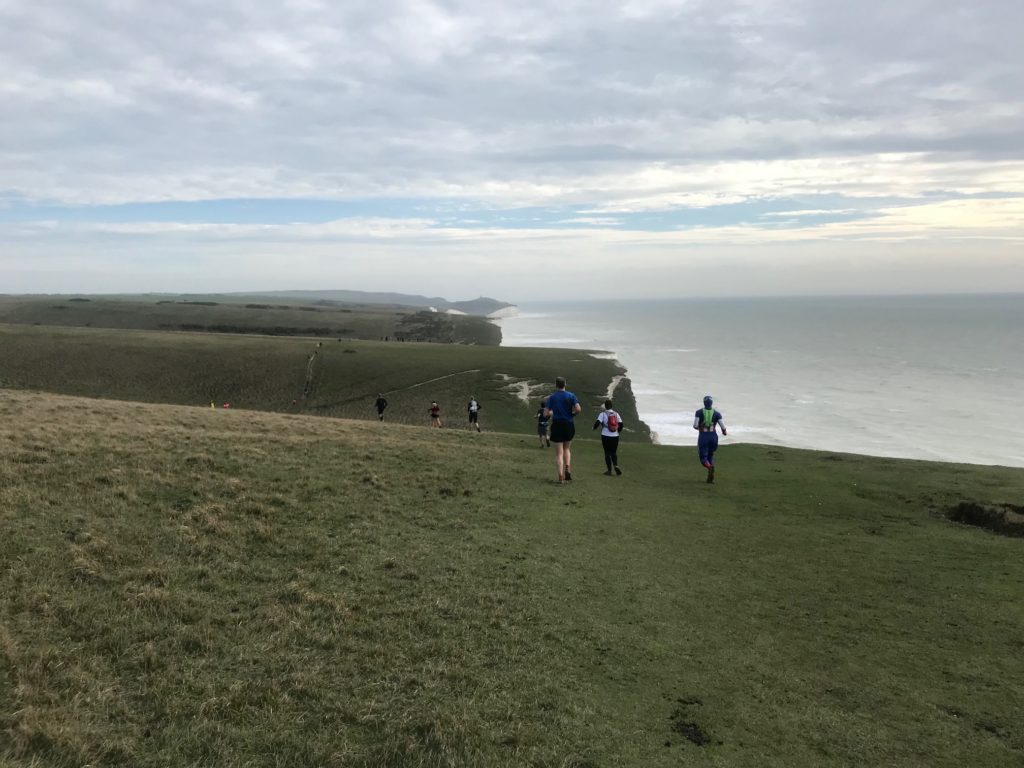 The race was won in 3:05:55 with first female coming home in 3:24:22. Absolutely amazing times given the ascent and terrain, I very much doubt they were taking photos or walking much!

There were 10 other harriers who finished (plus at least one more who ran unchipped due to a registration issue) – well done all, particularly the ladies at the top! My planned running bud for the day bailed on me due to late injury so it was great chatting to a couple of other deckchairs on the way round! 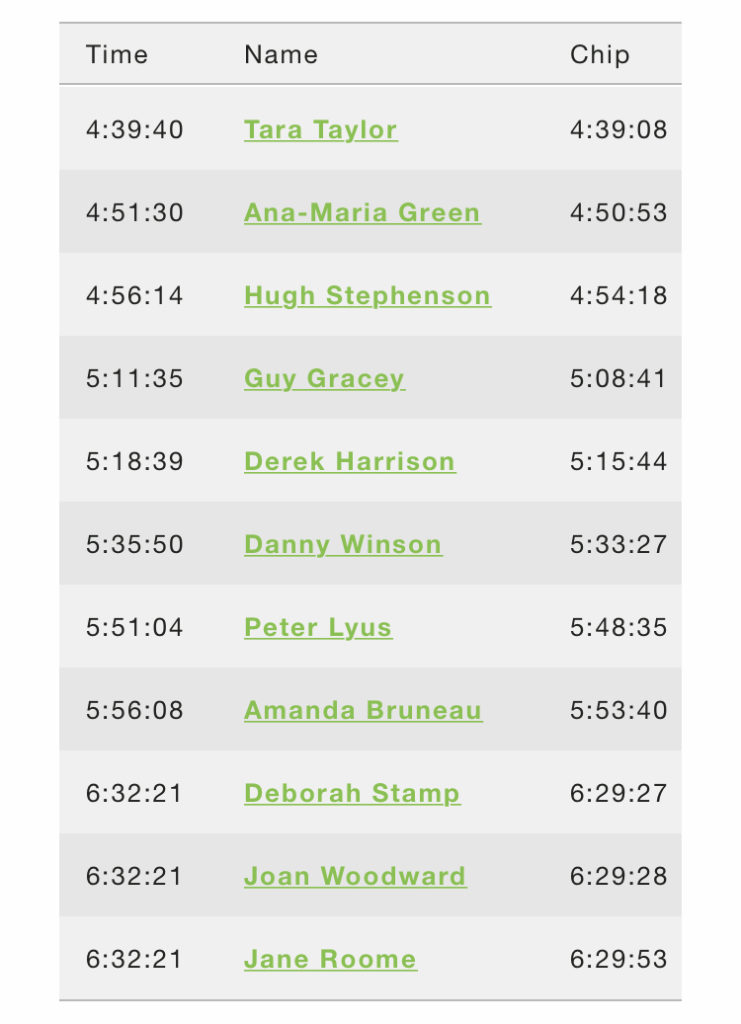 It was a beautiful, well organised, all trail marathon and the marshals and other competitors were super friendly. Id certainly recommend it to anyone who likes trail running. As I drove home in the pi55ing rain I did spare a thought for all those still out there walking the route but for me, a brilliant day. I’ll definitely be doing it again. 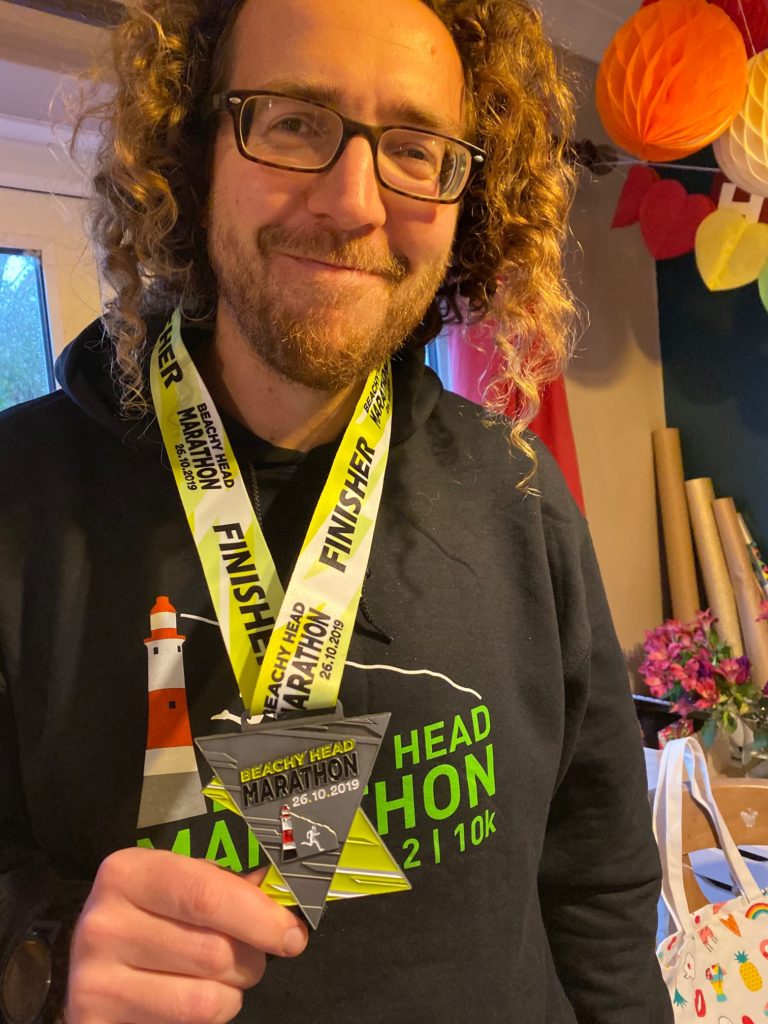 I too ran my 3rd marathon here and my first at Beachy Head. Indeed, my first that’s not London.

It had long been an ambition of mine to do this since spectating with my Dad in it’s former guise of the Seven Sisters Marathon. Having done the 10k twice in the last two years it was time to step up to the big one. With my dad (in his 75th year), uncle and cousin all running brilliantly in the 10k it was a great family day.

I started slowly, walking up the first hill/cliff face (great advice Cheeky!) and after a few stops at some bottlenecks got into a comfortable rhythm. The scenery was stunning, the weather unexpectedly sunny and the camaraderie brilliant. Feeling completely comfortable and serene what could possibly go wrong?

Absolutely nothing until nearing the top of the wonderfully named Borstal Hill at mile 11 my calf twinged. Me and calf muscles have plenty of previous so I feared the worst.
I then inexplicably did a very silly thing and tried to massage it. Big mistake. If it wasn’t torn before it certainly was now🙄

I hobbled very unsteadily and for a few worrying moments thought I wouldn’t make the next check point, never mind the finish. Thankfully it loosened up enough to get me to a point of an elaborate limp on the flat , I was able to power walk uphill and an occasional shuffle the rest of the remaining 15 miles.

I eventually hobbled over the line in 5 hrs 33 minutes which, all considered, I was quite pleased with.

I now have a very swollen and bruised calf with limited range of movement. Perfect for my walking holiday in the Lake District which starts tomorrow😅!! I anticipate I will not be running for at least 6 weeks but I will be back and I have no doubt I will be back for some unfinished business at Beachy Head next year.

This is a really fabulous event and I would definitely recommend it to those who are so inclined. 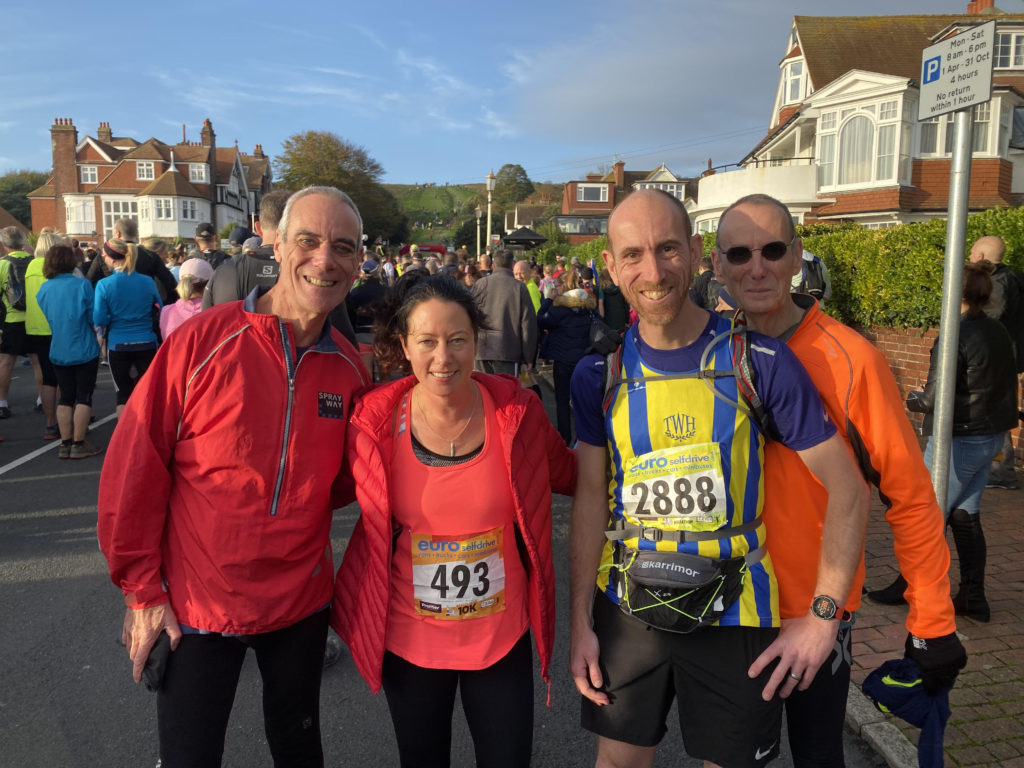 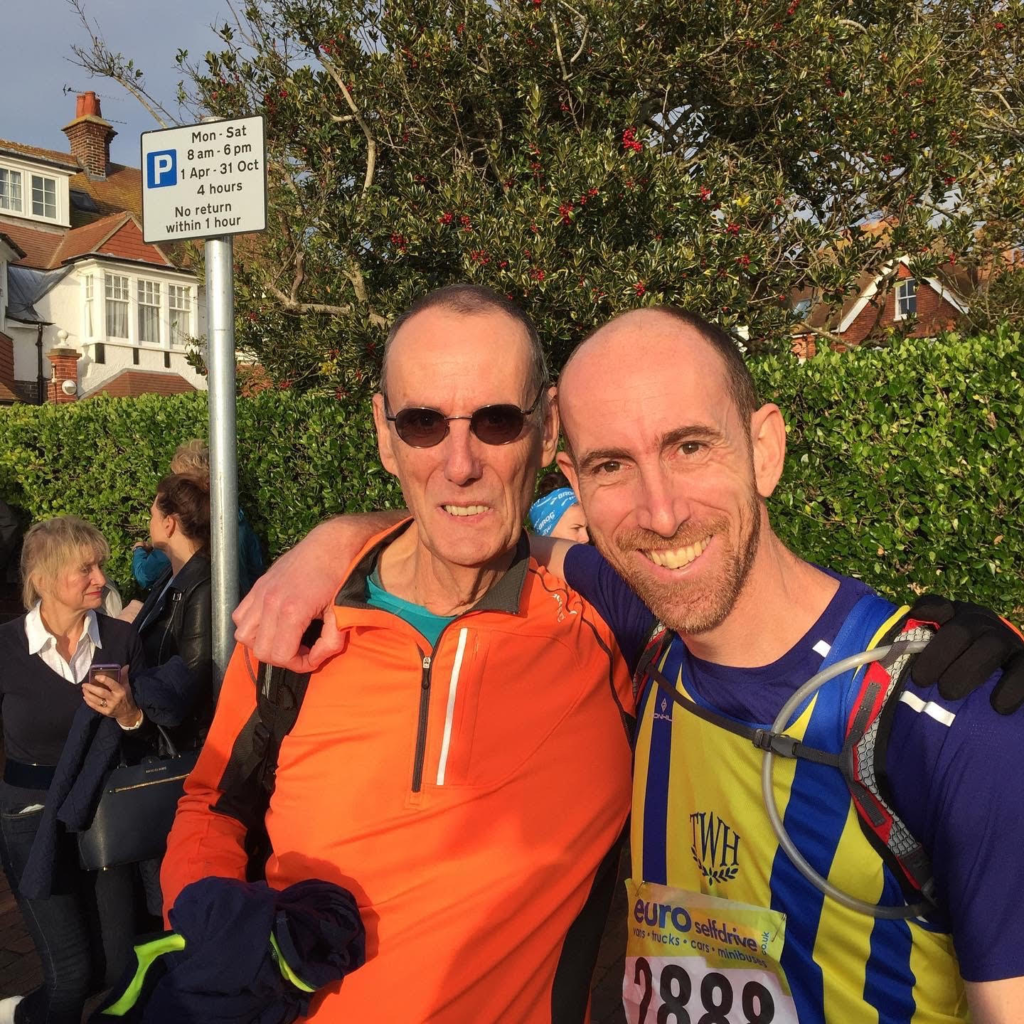