Mid Sussex Marathon – Saturday 30th April – Monday 2nd May
Nicola Morris took part in the Mid Sussex Marathon over the bank holiday weekend. It is a combination of three events, the East Grinstead 10 mile on Saturday, the Haywards Heath 10 mile on Sunday with the Burgess Hill 10k making up the marathon distance. Mike Costain and Andy Howey  took part in the East Grinstead 10 only. Andy finished in 1:04:24 (1st M50, 3rd overall), about a minute behind Adam Bennion and a couple of mins behind winner Tim Lunnon of Crawley AC (1:02:33). Mike came storming across the fields to finish in 1:15:27.

Nicola managed times of 1:22:01, 1:17:03 and 49:33 for each race respectively. She came 21st out of 158 runners, but won the ladies competition as first female home! A superb achievement, only 2 weeks after getting a PB at the Brighton Marathon. 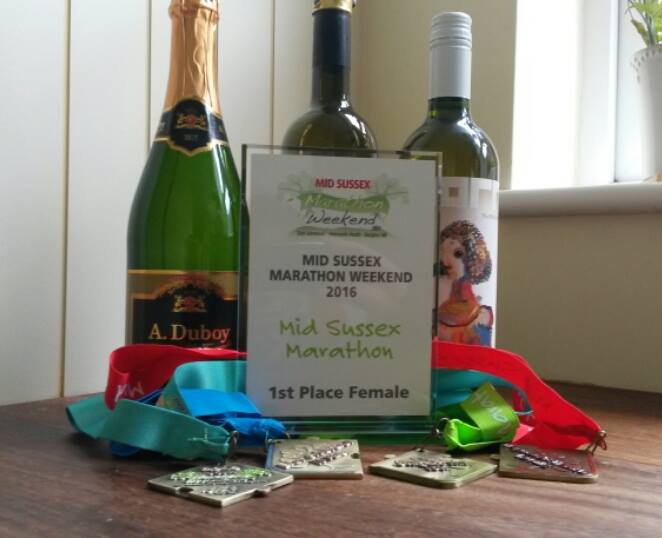 3 Peaks Race – Saturday 30th April.
Ed Steele and Chris Smith took on the 62nd Annual 3 Peaks Race, one of the longest Class-A fell races in the calendar, aka the ‘Marathon with Mountains’. A classic circular race held over the famous 3 peaks of Pen-y-ghent, Whernside and Ingleborough on a similar route to the classic walking route but with some deviations to make the ascents more ‘interesting’.
At 24-miles and over 5200ft of ascent and descent, the course can be brutal in its length and technical discipline – with some scramble ascents and slippery descents even in the best of weather.
There were all kinds of weather, from sunshine, to torrential rain, sleet and snow, with fog thrown in for good measure. The winner was Marc Lauenstein in 2:48:58. Ed came 388th in 4:32:56 (2 weeks after Brighton) and Chris was 516th in 4:51:46 with 703 finishers. 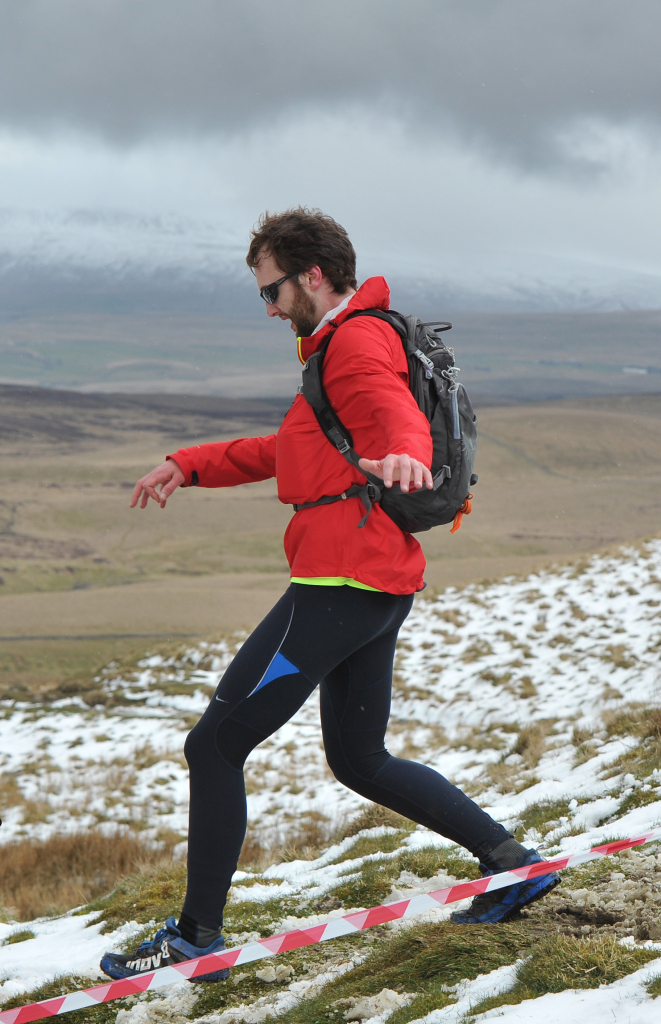 Three Forts Marathon 2016 – Sunday 1st May
On Sunday 1st May, Derek Harrison took on the very challenging Three Forts Marathon, only 2 weeks after completing the Bright Marathon! Known as “The Tough One” the Three Forts Marathon is actually 27.2 miles (a cheeky extra mile than normal) and includes 3450 ft of climb with a few stiles and rough tracks thrown in for good measure. The route starts at Hill Barn, Worthing, then takes in a number of famous areas on the South Downs: Cissbury Ring, the River Adur , Devil’s Dyke and Chanctonbury Ring. It finishes by returning to Hill Barn. Derek gave a great performance to come 130th out of 358 finishers in 4:40:33.

More Brighton Marathoners racing again were Mike King, Mike Kennard and Ana-Maria Green. They, as well as Neil Clark and Andy Joad, took on the Milton Keynes Marathon on Bank Holiday Monday. This was the 5th marathon in Milton Keynes, with an adjusted route this year to make it flatter, with 4,500 acres of woodlands, lakesides, parks and landscaped areas within the city boundary. Mike was first home in 3:22:57, followed by Neil (3:23:23) and then Andy (3:31:14). Mike Kennard and Ana both got 4:01:58 but Mike somehow finished ahead due to a second on gun time and his revenge for being beaten in Brighton.

Harriers, sons and daughters joined over 400 runners for the 31st annual May Day races in Hildenborough, ranging from 400m to 10 Miles. As usual a great family day out organised by the Taylor family, volunteers and marshals, making this event possible and a “Village Institution”, with some celebrities on tap. The road races followed a half, one and two lap undulating route (2.5, 5 and 10 miles respectively) along the country lanes with some bluebells thrown in for good measure.  With all three races going off together it was a quick start from the beginning with the youngster’s going flat out and you were left looking at the numbers to see who you should be keeping up with!

After the turn for the 2.5 route the field quickly started to spread out. At approx. the 3 and 8 mile points (the dog leg turn) it allowed you to see how close the competition was and if you needed to put in a bit of effort to stay ahead or catch up. Sticking with the lead vehicle and front runner for the first lap he turned off to win the 5 mile race, leaving me to go round again and come back to break the finishing tape to win the 10 mile race! Harrier results listed below with notable achievement also going to Stella Richardson, Lesley Mercer and Mick Barstow for winning their age categories. It was also a bit too much for star struck Stella having spoken to Kelly Holmes and receiving a raffle prize from her before the race.  Unfortunately Stella left after her race and missed out on another opportunity to meet Kelly, this time for her F55 prize.

For those Holby City fans, did you spot the other celebrity running the 5 Mile race?  Robert Ostlere, better known as Doctor Arthur Digby was running with his dad from Sevenoaks AC.