Having participated in at least one marathon every year since 2011 I felt I should keep this trend going so when London opened up the virtual race I signed up. Virtual London also allowed your time to count towards good for Age for 2021 and under the new limit of a count back on time once 3,000 entries have been received I figured I would need at least a 2:55. So much like the Ineos sub 2 attempt last year I needed to make sure I could control all the variables.

First off was training, as I didn’t want to get injured again and risk the main day I decided to go for the no marathon training approach. Next to diet and weight, well I’m pretty sure marathons use lots of calories so may as well eat more cake and crisps. Obviously for a fast time a superfast course with lots of downhill would be perfect, the Tunbridge wells circular certainly has lots of downhill, ideal! Next to equipment, well you don’t want to run out of water on route so a nice heavy camelback should help speed me up and some brand new trail shoes as well. The one thing which was out of our control was the weather and out of sheer luck it was torrential rain, this made the paths nice and slippery which surely makes them faster! We were a bit concerned the course was too easy so we also decided to round our run up to 45km. The only thing I was bettered on was that Patrick decided to also do the race with me but to save £20 by not actually entering, genius! Another great benefit of having Patrick come along was that his navigational skills made sure the route was even longer, who doesn’t like something for free!

Lastly Carole, Simon and Steve had set their route so that we would catch them towards the end of our run and provide that much needed boost to speed us through to the finish. Surely enough with 2km to go we saw them and stopped for a chat and some photos to help the time pass by. We then couldn’t believe our luck as our last 500m was an overgrown path with low branches and brambles to weave around before ducking for the finish line in an uneven field, I unfortunately managed to just miss my GFA goal in 4:38:44 (new PW).

So would I recommend doing a marathon around the TW circular, well it was pretty good type 2 fun so yes I would! I have also been meaning to do this since I moved to Tunbridge wells so the virtual London marathon was also a good excuse. As to why Patrick did it, well I promised him a pint afterwards!

Full credit to Carole for bettering my training strategy by completing all of the September Strava segments (2 5km and a 10km) in one back to back effort with only 3 days to go, the only slight issue was perhaps too much recovery time which hampered breaking 7 hours?

p.s I believe several others also took part so I would be pleased to hear their hopefully more sensible approaches J.

Yesterday I competed in, and finished the Virtual Brighton Marathon in order to maintain my ‘ever present’ status (currently 11/11)

Those of you who have been to Llanfynydd will know how hilly it is, and most that have been here have run my 4 mile morning circuit, so 7 laps of this was perfect for a marathon, including an extra mile or so for luck, starting and finishing at the pub.  As I was running locally I thought I’d also raise money to address the leaking roof in our 700 year old church.  The response from locals was fantastic!  It was the slowest road marathon I have ever run, covering 27.4 miles in 6hrs 35 mins. Oh, and I recorded 4839ft of ascent, managing to keep below the 15 min/mile pace, including some kit enhancements early on!

Well done to everyone else who completed their virtual races.

We’re one on the few places in Wales currently not under extra local restrictions, so at the  moment, if you fancy an autumn break, you’d be most welcome. 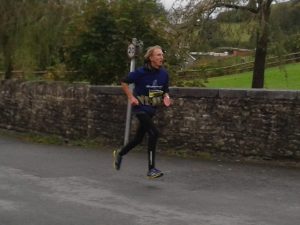 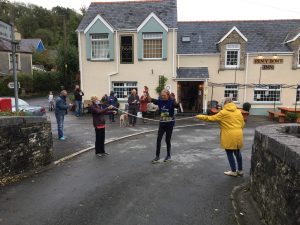 2 medals, a whole load of chocolate and a t-shirt, I wanted to do the virtual London because well I wanted to run the 40th edition of the race in 2020 (having run in 2005, 2010, 2015…. You get the gist)…..  But after a whole load of marathons that did not count towards the 100 marathon club during lockdown I’d be dammed if I was running another one that did not count – not if there was another way.

So marathon number 94 was run with the wonderful folks of Runbelievable who were hosting a weekend of running fun on the Ashdown Forest.  I’ve done this event before and we all know what the terrain is like over on Ashdown Forest, and with all the rain I was prepared that it would be a tough one.  Lol I just don’t think I realised just how tough!  This was not really a ‘running’ marathon, it was more about leaping over puddles, leaping into puddles, splashing through ‘rivers’ which appeared regularly on the paths, slipping down muddy hills, climbing up muddy hills – trying to think if there was any section where you actually felt you could ‘run’ and don’t think there was.

It was a lapped course 5 and a bit miles x 5, the aid station was the boot of your car – which on a positive means you get exactly the food you want and can have a little mini picnic every 5 and a bit miles. Anyway, enough about the ‘event’ I was running it was also ‘Virtual London’ I had the app, lots of faffing at the start (so much so forgot to switch Garmin on initially), the app was running – as was I.  I had company my first lap with another runner also doing the same as me doing the virtual London at an event, every mile we heard Paula speaking and the crowds cheering – I did not worry my phone was probably on silent…..  Anyway later in the race, I thought picture evidence of the conditions was the way to go, at which point I checked the app – something definitely not right, Garmin confirmed 10 miles in, just approaching the end of lap 2, London app showed I’d run 1.8 miles.

Another lap – and I can honestly say the half way point took forever – never before has 13.1 been so far!  At about 16 I pinged a message to my husband – I needed to share my pain……. With encouragement that I could do it I then carried on…… As usual at these events the support and encouragement from all the other runners was awesome, we got some strange looks from all the dog walkers out on the forest, one man even said to me why do they always pick the weekends with the worst weather….. lol weather is one of these things that can’t be planned…. Just in the hands of the weather gods.

At the end of lap 4 I checked myself in at the aid station to clock that I was going out on my last lap, to be asked had I found my husband?  Random – he was at home!  But no on hearing I was struggling and the going was tough, he had come out to support.  I can safely say I started lap 5 with a spring in my step and a smile on my face.  I duly found John and puppy – one very wet, excited puppy, safe to say the rain and conditions did not bother him.  They walked the course with me for ½ of my last lap, they then headed home to warmth, a cuppa tea and get the log burner going ready for my return.

I plodded on, only 3 miles still to go, it had started raining harder, but the knowledge I was almost there kept me going – oh that and the fact that Garmin was trying to tell me I’d been out ‘running’ for far too long and was about to run out of battery.  Phew made it to the end just in time – 4% battery left, but done and dusted Virtual London and Winnie the Pooh Wander all done.

Would I do it again….. yes lol but I will be having words with the weather gods…..