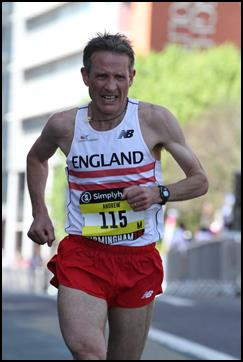 Back in February, I took part in the Chichester 10k, which had been designated as the southern selection race for an England Athletics masters’ team – a new initiative by the governing body. Running 35:19, I qualified for the team as 1stM55, and the Bank Holiday weekend’s Birmingham 10k was the big day to run for England against the rest of the home nations.  It’s taken me this long to get over the result and write the report!

I travelled up the day before to collect (buy) my kit and avoid rising at crack of sparrow on race day. Eventually locating the EA meeting room in the Crown Plaza Hotel, I tried my vest and shorts on for size in the gents, and it was only then that a mixture of nerves and excitement kicked in.  England… bloody hell.

The guest house was basic. Not a problem in itself, but with no air-con on a very hot evening, having open windows meant being frequently woken by turbo dump valves and squealing tyres from the ring road all night – not a good start.

In the morning, I headed for the EA tent in the grounds of Aston University, and met up with Tina Oldershaw and Maria Heslop (both in the W50 team), and Mark Pitcairn-Knowles from TAC who had just driven up with Maria and his dad Richard (Sevenoaks AC, M85). It was already in the low twenties and rather hot in the sun. The women masters had their own start with the elite women, with the men off 25 mins later at the head of the main field.

This was definitely the best bit of the day: we were in the elite start area, so while the masses stood sweltering in the sun behind the line, we had one tent for changing and another with drinks, together with our own portaloos. After realising I was sat on a bench doing up my shoelaces next to Andy Vernon (and just managing to keep a straight face), I then headed off for a few strides on the start straight.

So, onto the race. The plan was to run 3½ minute kilos to try to get under 35 mins – a reasonable target based on my recent form (and nice easy maths to deal with en route!). After the first kilo, I felt a bit rubbish, which I just put down to a bad night. I went through 5k on target in 17:27, but on turning to head back into the city centre I realised we’d been running with the breeze and I’d started to overheat. A dousing at a water station and a water spray a bit further on were only temporary help, and I slowed markedly as I got hotter. The slope up to the finish was a crawl, and I lost 1½ mins in the second 5k to finish in 36:30. Very disappointing for a mostly flat city centre course, as I was only 3 secs slower for our hilly handicap a few days later!

There was no water at the finish line, but I found some in my goody bag after what seemed like a very long trudge. Still overheating, I had a brief stop in the first aid tent before heading off to find the TAC runners. Maria had pulled out a storming run of 36:28, finishing 1st W50 and beating some of the elite women (and she then went on to win the Hildenborough 10 the following day!). After team photos, watching Maria receive her medal and Richard take the 1st M85 prize, I headed off to Oxford for lunch with Rob. To be honest, I can’t remember much of the drive, and it was only after I cooled down in the café later that I realised how much the heat had affected me.

In the end, I finished 5th M55 (and 67th in the race), and with only England M55 runners ahead we won the match comfortably. For completeness, the race was won by Moses Kipsiro of Uganda in 29:08, with my bench buddy Andy Vernon finishing second in 29:35. The women’s race was won by Aleksandra Lisowska of Poland in 34:12.