Given Kieran’s recent race report, I thought I would offer on this occasion to attempt to convey today’s efforts.

Having looked at the weather warnings and carefully considered the forecast, 13 Harriers decided that heading to Lydd was a great idea.

After a late start (for some unknown reason) we all set off head first into gale force winds. Although these winds did not subside for the entirety of the 20 mile course, the initial section was almost laughable. Out in the open and vulnerable to the elements everyone was being blown this way and that. There were a fair few bumps into others as the gusts took your legs out from underneath you and we had a cap casualty and Rose’s flew off into a stream.

As tempting as it was to try to get the run over with, most of us were using the 20 as a chance for a training run for upcoming Spring marathons and so tried to not get ahead of ourselves, or get caught up in the half marathon runners who all started together. As we all plodded along, avoiding the flying debris, the 20-mile runners took their right turn and let the half carry on straight. After that turn, the real fun started. With some parts being sheltered with trees you would think that would provide some respite. Unfortunately, this created more hazards as they were falling down around us! The race organisers did their absolute best to get chainsaws to the majority asap but I think this is the first run where I have had to crawl underneath a tree and hurdle(ish) over others! Not to mention the horizontal hail-like rain that, thankfully, lasted only a few minutes.

All in all, some really strong efforts for both races, given the conditions. A very flat (and would be fast minus the 40+mph winds) course and well organised from what I could see. Would recommend with a better forecast!

See below for results table. There were 681 finishers with first male Ben Shearer of Cambridge Harriers coming home in 01.51.49 and first female Emily Proto of Arena 80 AC in 02:17:42. Congratulations go to the ladies team who won First Ladies Team Prize (Gem, Nicola and Hayley)! 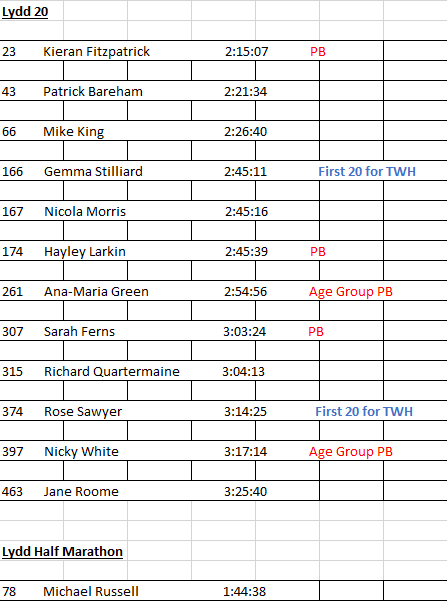