As many of you will now know, last Sunday (19th August) I took part in a successful attempt on the British 4 x 800m relay record in my age category. Before giving you some background to this, I’d like to thank all of you who have offered your congratulations – it’s meant a lot to me. Many Harriers have put the club on the map over the years, and it’s been great to contribute to that.

A few weeks ago, I was contacted by Adrian Haines of Crawley AC who was organising an attempt on the world record for the M50 4 x 800m relay. One of the stipulations in the UKA rules is that any attempt should take place in a bona fide event with at least two teams competing, so Adrian was also recruiting teams for as many other masters’ age groups as he could. Andy Gannaway from Winchester AC was given the responsibility of getting an M55 team together, with the objective of aiming for the British record, the world M55 record being just a little too far in the distance. Our mark to beat was 10:08.7, set by Sheffield RC in 2016, thus requiring four sub 2:32’s from us. Our team was Andy G (ranked 9th in the UK for 800m this year with 2:17), Jon Tilt of Southampton City AC (ranked 3rd, 2:13), Kevin Pye of Notts AC (ranked 26th, 2:23) and me, ranked 5th with 2:15. What could possible go wrong, apart from a tailback on the M25, dropping the baton or a gale force wind

The event was scheduled to take place near the end of the superb Masters Grand Prix at Lee Valley Stadium, an event conceived and organised by masters athletes rather than any governing body, but the politics of that are another story entirely. When I finally got there after sitting in stationary traffic on the M25 for an hour, it was blowing a gale – just the baton to keep hold of then. It was so windy that all of the sprints were moved to the back straight. Lots of 100m and 200m races with illegal following winds over +2 m/s, but lots of PBs too! Accounts of Sir Roger’s sub-4 minute mile say that the flags suddenly went limp just before the race, but there was absolutely no chance of that for us

After meeting the other guys, sorting out a GB vest and getting numbers, I went for a warm-up on the adjacent golf course. It seemed rather overgrown and unkempt, so I set off up a fairway, only to have a golf ball narrowly whizz past. Too close for comfort, I ducked through some bushes and headed back to the stadium, and on the way was buzzed by a drone filming a Hindu wedding ceremony. None of this helped my nerves.

Five teams lined up, with rules as per the 4 x 400m: first leg to break from lanes at 100m, with the same changeover zone extending each side of the start/finish line. I was running the third leg, and it was clear from the gun that we were the back markers with the crack M50 squad in a leading group of three with two M40 teams. I don’t have any splits, but I know that my first lap was hard, really hard. With the wind, it was probably harder than any 800m than I’ve run for years, and then I had to pick the pace up. With 300m to go, I flew down the back straight with the following wind, and then seemed to come to a standstill in the headwind on the final bend. From there, it was a flat out sprint down the straight to hand over to our anchor runner Jon. After his two laps, Jon crossed the line in 9:38.50, setting a new record by 30.2 secs. And we didn’t drop the baton. To be honest, an average time of 2:24 per leg left me feeling underwhelmed, but the exhilaration of having set a British record soon took over. The M50 team missed out on a world record by an agonising eight hundredths of a second – that bloody wind – but just a few minutes after our race, an M40 4 x 100m squad anchored by Dwain Chambers set a new world record… stunning to watch.

I made a conscious decision to take part in events outside my comfort zone this year, ranging from the North Downs 30k all the way down to a couple of 4 x 100m relays, with a variety of road, cross country and racewalking events (yes!) in between. This was definitely the highlight though… I’m not sure I can top it in the remaining 4 months of 2018. 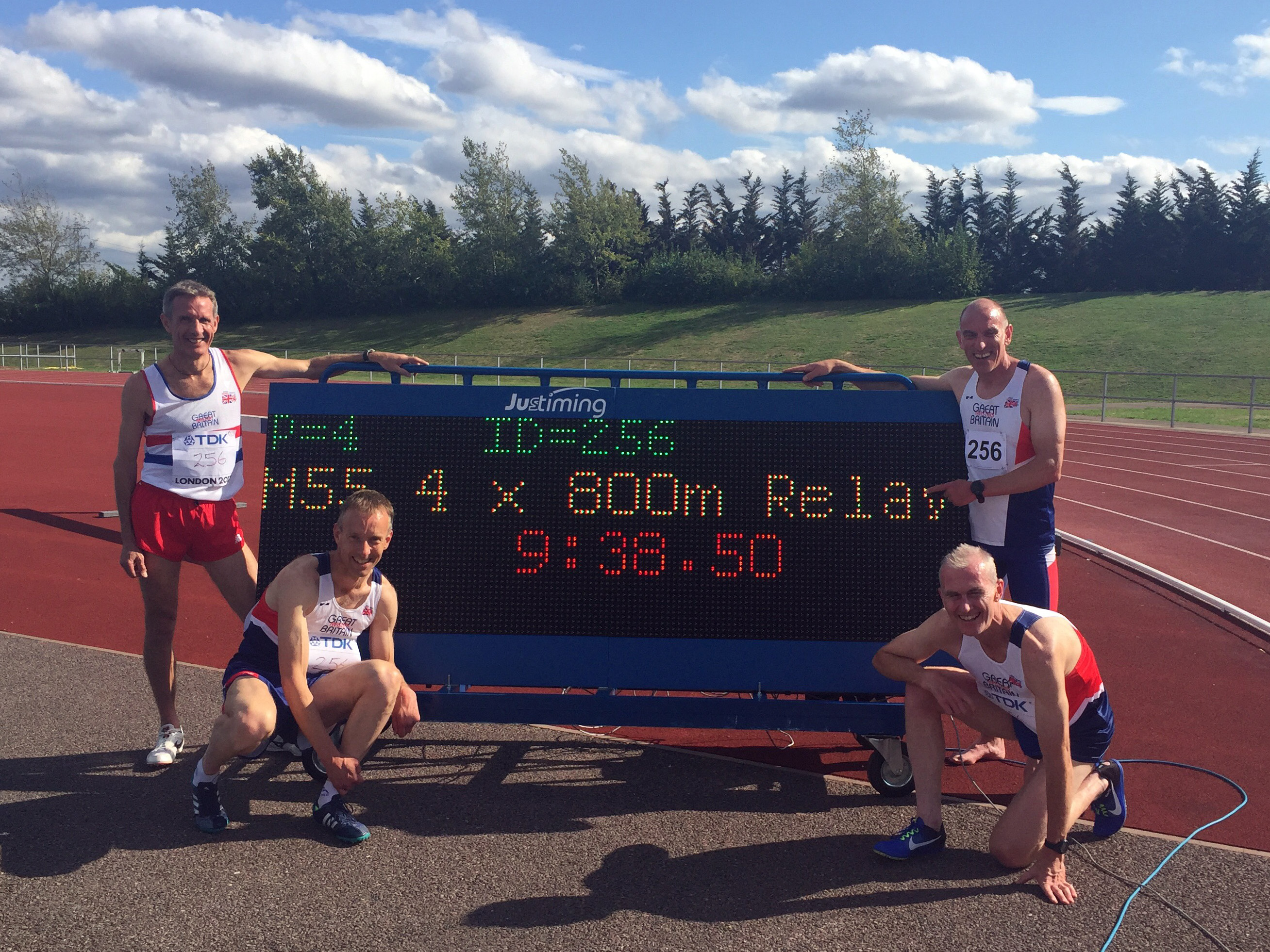 [To my right: Andy Gannaway and Kevin Pye (kneeling), with Jon Tilt standing]