Skip to content
30th January 2018 Edward Steele
For any Harriers who are considering a January marathon, I would rate this event
The route starts with a 2 mile run out to a country lap which you complete four times before running the 2 miles back to the start/finish area.
On the whole it is flat with a couple of what is known by people from Tunbridge Wells as undulations, but others less vertically blessed geographically may call hills.
There is also a half marathon and a 50k ultra option which start at different times and in the case of the 50k, different places.
This could have been advertised better as there was some confusion with the crazy 50k takers.
The marathon had about 300 entrants which is a nice number and plenty of pleasant company to run with as all disciplines do the same lap. Be aware of farmyard smells around the route, these are lovely country lanes.
Water stations were very regular, and there are loads of places for supporters to head out and watch from.
It all came together nicely for me as I managed a P.B. Coming home in 3h 49 mins and taking half an hour off of my previous best time. I think it is fair to say I was the first Tunbridge Wells Harrier home too!
A technical shirt and a decent bit of bling with an image of Gloucester Cathedral greet you at the finish. The event was a good value at around £30.
I also ran as a harrier in the Greenwich 10k last weekend, again another PB of 44.18.
Thanks
Paul Hollis 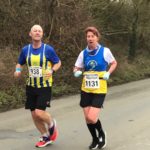 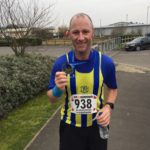