It all began way back in February when I was talking to Bob Lawrence about which events I should consider running in the future. I am never going to run a Marathon so an event of a distance over the classic 26.2 Miles was never in my thoughts, but I did want to test myself and the 4 Day Challenge, where the total distance raced was greater than a Marathon, was an obvious choice to put on the bucket list. A number of members also showed interest so we booked flights and waited for others to do the same. Nobody else did, but we decided to go anyway. I am so glad that we did. Training had been punctured by work related injuries but, with a flexible training plan, I was in shape to, at least, complete each day of competition. (I hoped). Bob’s training had been hampered by a house move and was not as well prepared as hoped but was going to “stumble through” the four days. It was going to be a series of firsts for me. My first flight for more than twenty-five years, my first ever sunshine and hotel holiday and certainly my first ever overseas running trip.

Day One of the Challenge was a 6K time trial where competitors are set off at 10 second intervals. It was very interesting catching some of the early starters while being swallowed up by the faster athletes who were frighteningly speedy. I went passed Bob early on and was quite surprised at the end to find that I was heading my Age Group. Bob finished a little later, but not too distressed. A short Coach Ride back to the hotel gave me time to take my first sea swim, with Bob taking his more customary spectating role.

Day Two was The Uphill Multi terrain race. The hardest of the four days: 11K of running almost continually uphill. The winner, who is a sub 30 minute 10K runner completed the course in 45 minutes 46 seconds, which was a record. All agreed that to record such a time on that course was obscene. At least it got all the runners talking. I managed to increase my Age Group lead as I was again first “old bird” up the hill. Bob was not so lucky and after suffering with a problem exacerbated by his blocked ears decided it would be foolish and advised officials he was dropping out. He still had to walk most of the way to the finish. Our reward was an epic sized ice cream that was worth all the pain.

Day three was to be my first ever Half Marathon. I am sure I could have picked an easier route. The first 100 metres was up a hill that made Frant Road look like a gentle slope. The route continued to climb on rugged tracks for about 5K before descending the southern side of The Akamas peninsular until we reached the Coastal track which we all followed for the final 10K finishing with the final 400 metres on the beach and soft sand. Bob had been supporting about 2K from the finish so I had time for a quick swim before he returned craving another ice cream before heading back to the hotel. The Austrian lady who had won my Age Group in 2018 was now some 8 minutes behind me with one race to go so Bob was confident that I could complete the set and win my Age Group overall.

To avoid the Paphos Sunday traffic and the Paphos Half Marathon that was taking place on the same day a very early breakfast was put on for us so we could be transferred to Paphos Harbour in readiness for an 08:00a.m. start. Bob made a few enquiries from some of the other competitors that he knew and we realised that if I stayed in front of Mike Gratton (our tour organiser) I would be safely in front of my Age Group challengers. Finishing in front of a London Marathon winner did also give me a huge sense of satisfaction.

Time, afterwards to reflect on the whole event. Four very different races that were superbly organised, brilliant marshalling, a live results service, twelve different countries represented, good quality hotel, but above all the competition was the friendly atmosphere between competitors. Would I do it again – at the drop of a hat. I loved every minute of it.

Sorry this report has been so long but, to me, it was worth recalling every detail. 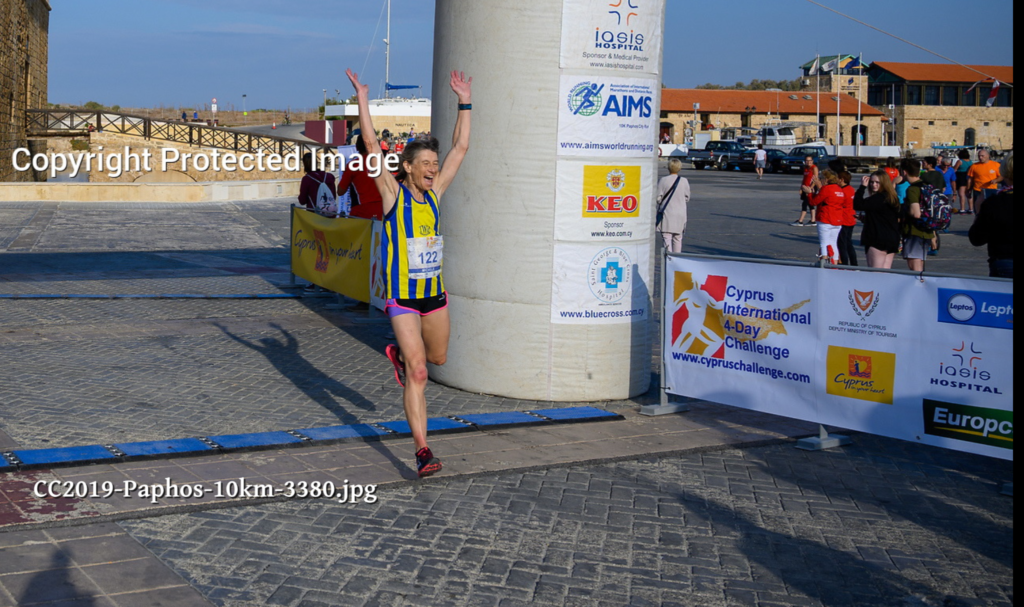